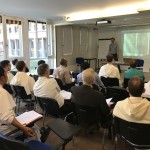 In the context of a seminar held every four years, the members of the Leonine Commission shared results of their research for the edition of the writings of Saint Thomas Aquinas with members of the Dominican order, both friars and sisters, who are involved in study and research.  With reference to work in progress, but also to already published editions, the seminar offered an opportunity to become familiar with the history of the composition and transmission of the works of Saint Thomas; with the method used in editing them; and with their contextualization, in relation not only to other medieval authors, but also to Saint Thomas’s sources. 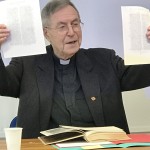 In nine working sessions, and in three workshops that were presented each day, the members of the Leonine Commission explained the principles and application of the sciences involved in the editing process (codicology, paleography, ecdotic method and textual criticism, study of sources).  The working sessions were complemented by an examination of manuscripts of the former Couvent Saint-Jacques that are now conserved at the Mazarine Library, and a tour of medieval Paris. 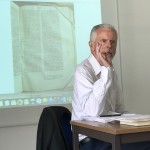 Fourteen Dominican friars, one sister, a layman and a priest, from several continents, took part in the seminar.  They expressed their satisfaction with the seminar, and requested that the Leonine Commission consider holding more frequent such sessions of formation in philology and Latin paleography, even in Dominican centers of study outside of Europe.